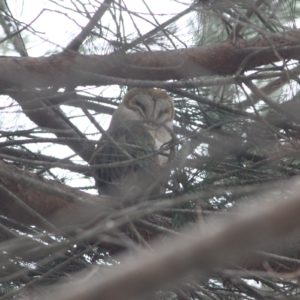 I was just wrapping up mowing the back yard yesterday when my wife stuck her head out the back door.

“THERE ARE TWO COPS WALKING UP THE HILL,” she yelled.

I ducked out the back gate and walked over to the north end of our lot where I find not cops, but animal control officers looking up into a pine tree.  About 35 feet up in the tree was an owl, with one wing outstretched at an odd angle, flapping away.

Much discussion ensued: Was the owl injured?  Was his wing stuck on one of the branches?  Was he a juvenile who couldn’t yet fly?  How might someone get up to the owl?  What would that person do when they got there?

I knew my ladder wasn’t long enough so I went down the street and borrowed a neighbors ladder, carried it back, and propped it up against the tree.  Nowhere near long enough and not anywhere close to the outer end of the limb where the owl was.  At this point, the owl was no longer flapping; he sat stoically looking down at us. 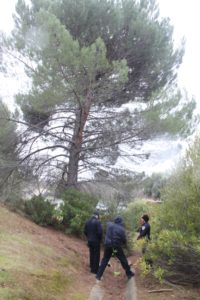 “The fire department won’t respond for cats in trees,” they told me.

A couple minutes later, the fire truck rolled up.  Firemen got out, walked up to the tree, and looked at the owl.

More discussion ensued.  The upshot?  “We need a bigger truck.”

While we’re waiting for the big truck to show up, the discussions continued. 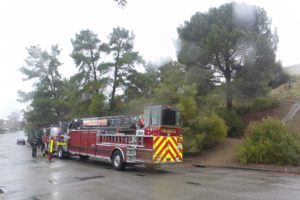 About that time, the really big fire truck showed up. 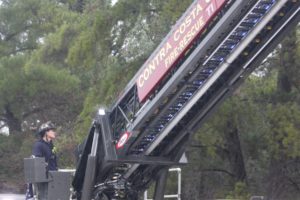 They started moving the ladder into position… 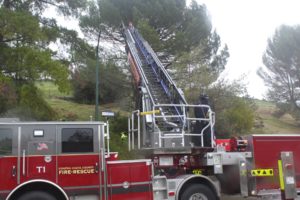 … and at about this point, the owl decided that he’d had enough of all this and gracefully flew off to another tree.